Some of the Best Places to Visit in Pembrokeshire With Kids

mytravelmonkey09/05/2019
Adventures At HomeAttractionsDestination GuidesWales2 Comments 0
Disclosure: I need to let you know that if you click on some links within the post, I may earn a few pennies. I may have also been compensated to write this article, gifted an item, or been hosted on a press trip. Please see My Travel Monkey's full Disclosure Policy for more details.

On our recent family trip to south-west Wales, we spent several days packing in as much as possible to discover the best places to visit in Pembrokeshire. It’s a fantastic destination in the UK and it’s a region that boasts ‘the second best coastline’ in the world as voted for by National Geographic experts and tons of family-friendly attractions, too.

Pembrokeshire has over 50 beaches which also means there is more than enough to do for those looking for outdoor pursuits, as well as nature lovers – you can head to Skomer island and watch puffins nesting until the end of July. Foodie fans will be overwhelmed by the choice of restaurants and, even in the small town of Narbeth, where we were staying with Coastal Cottages, there were three eateries rated by the Michelin guide plus a wide choice of family-friendly restaurants.

Places to Visit in Pembrokeshire…

With or without kids. In just five days, we managed to find quite a few hotspots as well as amazing things to do in Pembrokeshire that will appeal to families, couples or individuals who would like to learn about the history of the area as well as discover postcard-perfect views and landscapes. From Tenby attractions to indoor highlights in case the weather doesn’t play ball, here are some of the best places to visit in Pembrokeshire that are not to be missed…

Think remote, wind-swept and something out of a Dickensian novel, Barafundle Bay is all of these and more. A huge expanse of sandy beach which can only be accessed via foot, it’s well worth the walk. And with neighbouring Stackpole beaches Broadhaven South and Fresh Water West, close by, there is much to enjoy from the spectacular views and waves crashing against the cliffs.

We wandered along the coastal paths in what felt like gale-force winds. It was so cold, our ears hurt from the exertion. However, it didn’t detract from the hugely enjoyable amble along Baranfundle Bay from the National Trust’s Stackpole Quay – where we had enjoyed a cream tea and cup of tea in preparation for our mini-beach adventure.

I think as National Trust members we’re hard-wired to look up our closest site whenever we go anywhere in the UK. And they never disappoint. Colby Woodland Garden was one such discovery during our Pembrokeshire trip. It sits in a hidden wooded valley, near Amroth and was once industrialist’s John Colby’s coal mine. The coal was taken to along the coast on wagons and then on rails along to Saundersfoot (below). You wouldn’t know about its industrial past, because in 1837 pharmacist Samuel Kay brought the house and set about transforming the land.

With the spring flowers just starting to awaken, the woodland garden is an ideal setting for families who want to explore the ground’s recesses and gardens. The children loved the wildflower meadows and I enjoyed the peaceful walled garden with its trickling water feature and sculptures. 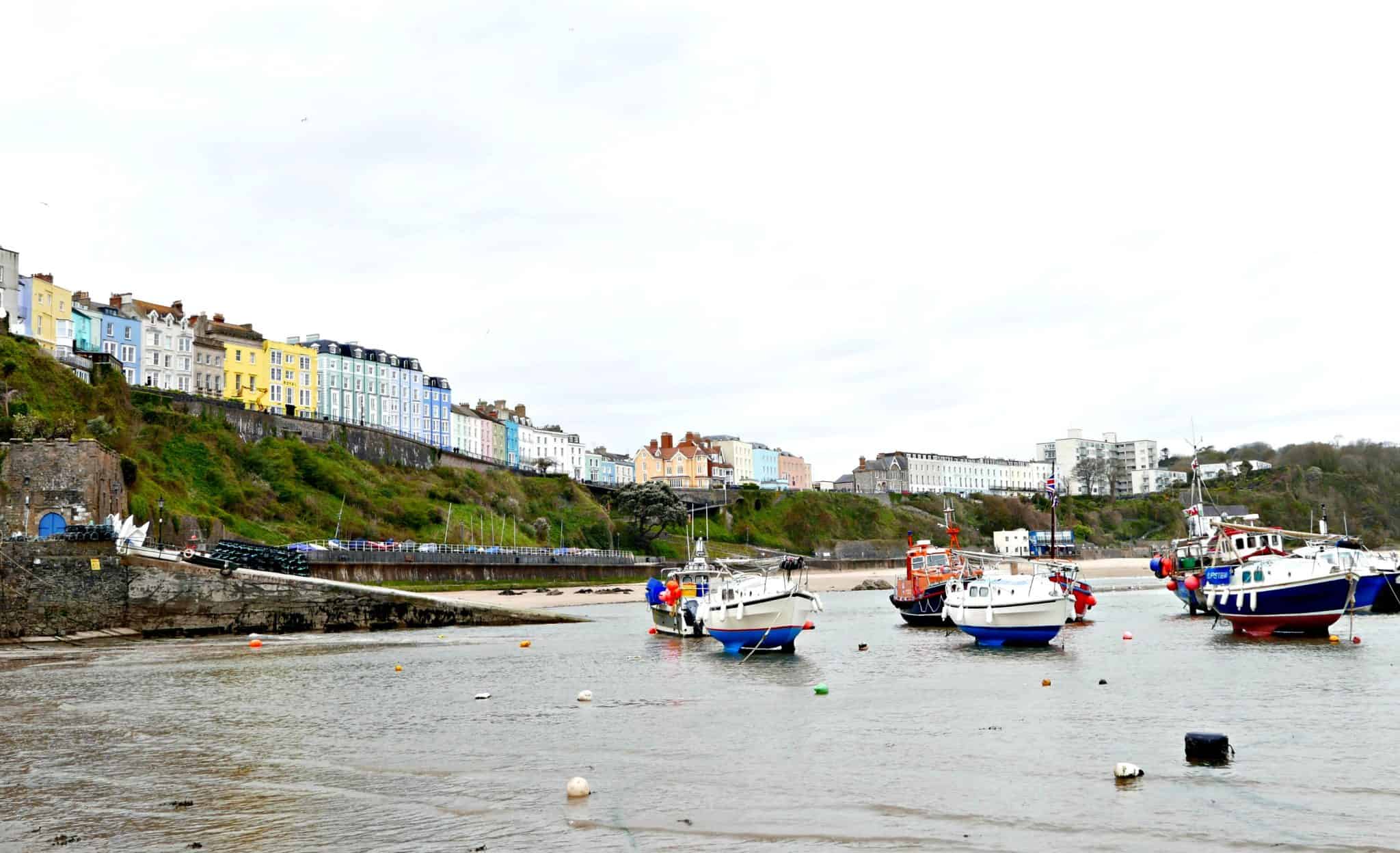 When talking about the best places to visit in Pembrokeshire, Tenby has to be a must-see. So, what is there to do in Tenby? Just walking underneath the 13-century walls of this harbour town and you’re transported to a bygone era. Through the Old Town, wander the cobbled streets and enjoy the eclectic mix of shops, cafés and restaurants.

You can then explore around the harbour and catch a boat to neighbouring Caldey Island but if that doesn’t take your fancy, then perhaps a stroll up to Tenby’s South Beach toward Giltar Point and the start of the Pembrokeshire Coastal Path for amazing views. Meanwhile, you can learn more about Tenby’s interesting history as a Welsh stronghold and spy the ruins of Tenby Castle on a headland overlooking the harbour. There are also exhibits at Tenby Museum and Art Gallery and a Tudor Merchant’s House recreates domestic life in 1500, with a merchant’s shop and working kitchen.

What we love the most about Tenby is its beautiful sandy beaches –  three in fact, and perfect for family fun, as well as finding a spot to enjoy fish and chips by the sea.

If you’re looking for family-fun even in bad weather, then Folly Farm is a brilliant option as much of it is undercover. From a huge animal section where children can get up close to farm animals and learn about them all, a vintage funfair with rides for toddlers and upwards, and a gigantic indoor play area, it’s safe to say we all had a great day out.

I was impressed by the sheer amount of activities to do – and don’t let the word ‘farm’ fool you, either. There are also exotic animals including penguins, lions and rhino. Meanwhile, the outdoor play area and pedal tractors provided much entertainment for our two. With over 120 acres to explore and eight different adventure areas, kids will love it…

The birthplace of Henry VII, Pembroke Castle is one of the largest castles in Wales and is also one of the country’s most important medieval monuments. When walking from the streets, the impressive walls and turrets loom large, and even Monkey was fascinated to learn that the castle has stood on this rocky headland for the past 12,000 years. 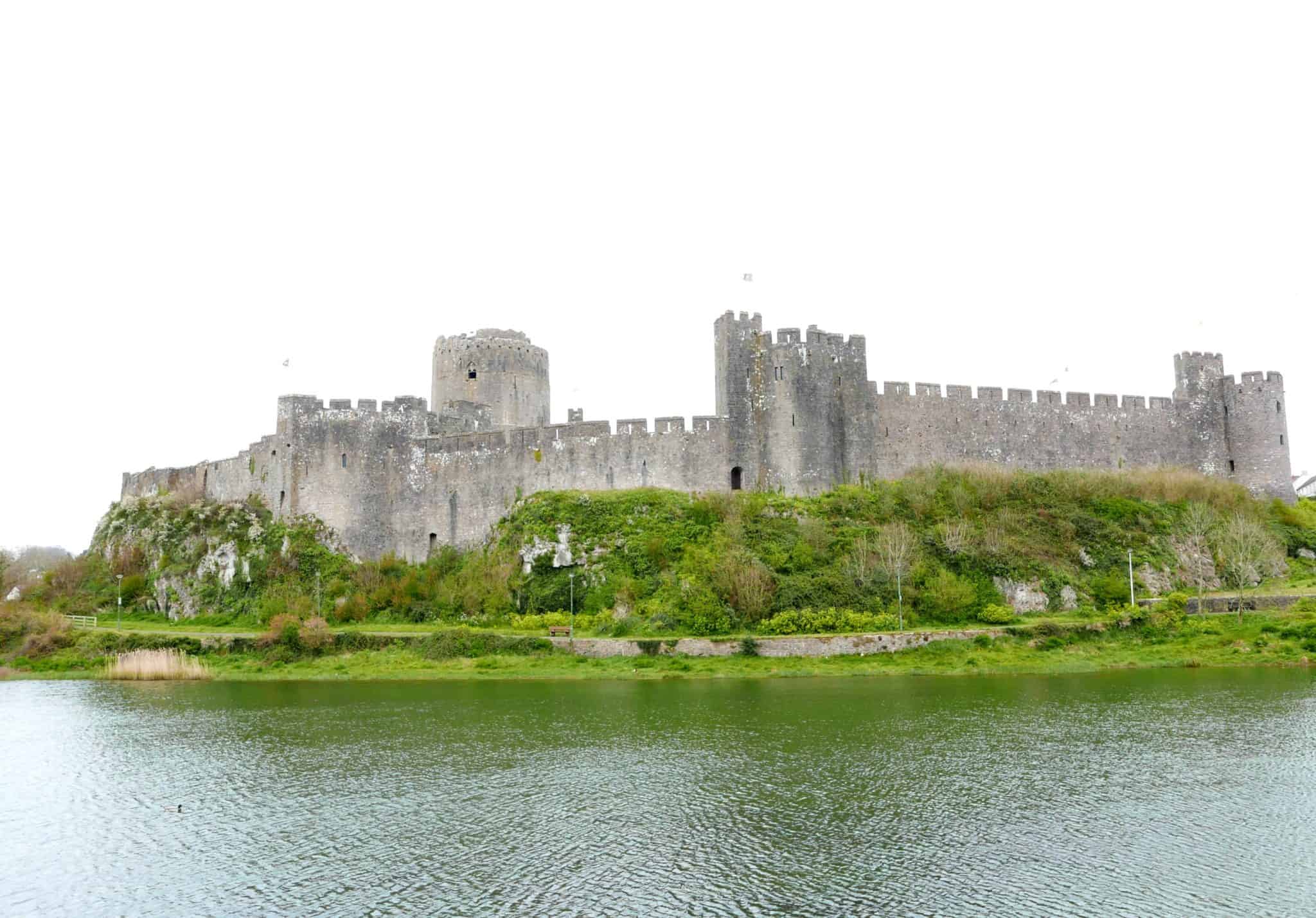 During our visit, we were lucky enough to watch reenactments from men dressed up in civil war uniforms, but what we most enjoyed was wandering the impressive grounds and soaking up the history from within. Even though the children were a little too young to understand Pembroke Castle’s history from its days as a timber castle, right through to the Tudor period and the Civil War of 1642, it was still fun for them to run through the dark, stone corridors and walk along the castle walls, as well as coming across all the informative exhibits.

Imagine one-minute shooting arrows, and then the next being encased inside a Zorb on water? This is exactly what Monkey revelled in when we took him to Heatherton World of Activities. It’s essentially an outdoor adventure park which is home to an endless amount of fun.

Admission is free, but you have to purchase a book of credit in exchange for taking part in a number of activities – from bumper boats to Tree Top trails, Monkey couldn’t decide what to do first. Our favourite was playing crazy golf, where even Peanut could join in the game. For Monkey, however, he was in his element at the go-karting zone. Dressed up like a racing driver, and zooming around the circuit for several laps, his smile was infectious. Heatherton is more suited to older children around 6+, and while Monkey could have stayed for several more hours, Peanut was bored after a time.

The huge sandy beach is the main draw but as is its vibrant harbour town with a great choice of restaurants, pubs and cafés. We drove in and had a lovely family meal, and then grabbed ice creams and walked along the beach. Good times.

The Best Places To Eat and Drink in Las Vegas

The Top 10 Things To Do in Hua Hin, Thailand

The Top 10 Things To Do In Palma de Mallorca

12 Reasons Why You Should Go To San Sebastian With Kids

Top Things to do in Palma with Kids